Tonata…….No, no, a thousand times no!

I shall try to keep things as simple as possible but it is a very complex subject.  Let me begin with subtle energies.

To my way of thinking the subject of energies is another way of describing the whole of creation, so it can hardly be done in five minutes.   Energies or ‘different levels of being’ are the very stuff of existence.   What to people of my level of being or Life we call solid matter – you would undoubtedly call, at most, a mist!   For it is how it is perceived, how it is experienced, how it is used or how, I would prefer to describe things, how it is danced with as to whether it seems solid or not.

The more ethereal end of the ‘spectrum of being’ that I could describe to you, would be meaningless.   For to describe that energy in an incarnational framework is really beyond my ability to say – and for you to understand, so I cannot give a complete understanding of energies.   I will try to give impressions of those levels but I am doomed to failure.

Let me confuse that picture even more at the start of my talk!   At all levels there is masculine energy or feminine energy, or sometimes both.   Also a description of energy must include whether the energy is that of a flowing type or a stationary one.   Both types can be a power.   One is not better than another.   It is just a way of describing more of what seems to be, or appears to be, an experience of life. Some forms of energy can even be both of a static type and of a flowing type, while another form of energy may only be worked with as one type rather than the other.   Horrendously complicated!   So let us simplify that a bit if I can.

Picture, if you will, a flow of energy that is seen to pass along a channel where little is dissipated or lost.   An analogy could be of water flowing along a trench or channel.   Because it is actually flowing it has a force – it is felt and perceived.   That is a flowing type of energy.

There are even situations where the water is still and the waveform is still and yet energy flows somehow.   This is resonance.   Resonance is an example of this type of energy flow for the energy seems to appear out of nowhere.

Who is to say which type of energy is more powerful?   Rather you have to look at the desired effect and compare that with your actual result.   That should give comparative strengths.

One rather simplistic attitude, when looking at the human body, is to link the seven levels of being with the seven main chakras or energy vortices.  In that case, if there is an apparent blockage of energy at one charka, then there is a problem – there is ill health.   What is not understood is that there are six other levels of being at each of those chakras in addition to what is obviously felt, perceived and understood with the simple picture.   Which energies are flowing?   The blockage could be for certain energy at, say, the first level of being, but some kind of energy could be flowing at all the other levels of being in that same chakra.

The human body is not a simple mechanism.   It is a very complex picture in reality.   It is a totality of all these energies put together, and there is much duplicating of flow to achieve health or effect.   For example, a person who is thought of as weak or sensitive may be a channeller or clairvoyant.   In this instance, what appears to a healer to be a problem or blockage resulting in physical weakness, may be in fact strength at another level, enabling the psychic awareness to operate – not that all sensitives are weak or in ill health! 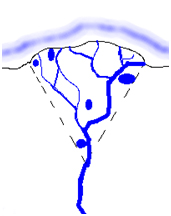 Let me give another example.   Picture a river that has a large estuary, a delta formation.   At times the delta will be large, but at
other times it may be quite small depending upon the amount of water flowing and silt being deposited.     The normal cycle of the healthy delta formation means that there would be blockages forming and passageways silting up.   At certain times, there would be local flooding of a small area and often when that would happen there would be a shifting of some silt and another channel of the delta would open.   Water would flow in a different way.  However, it does not matter if we are looking at a major flooding time or even at the lowest time of the year, water would always reach the sea.

So it is with the human body.   If one or two chakras seem to be blocked then it would be perfectly in order for the energies to go around a different route.   Who is to say which passageway in the delta is the right one?   Who is to say how energy is to flow to produce what is right for the overall health of the person?     So if a healer treats what appears to be a blockage and shifts the silt, as it were, it may be causing more harm than good in other areas of that person’s life.   It may be perfectly right for that person to have a particular blockage at a particular time in particular circumstance because of other considerations, gifts, talents or lessons in life to be learnt.   The obvious is not always the best or correct.

I am aware that that could be interpreted as “what will be, will be” and whatever happens is arguably ultimately correct.   I am not saying that.   I am saying that the situation should be very closely inspected and that a healing should not be rushed into.   So the question should always be “What is the healing required in this situation?”

Thus a healer should never take for granted that this or that action should be undertaken, but rather a wider view of things should be looked for.   Perhaps a patient should be left ‘unhealed’, to work their own way through Life rather than be worked upon, because in their apparent imbalance there is other growth, other lessons to take place, which is required for the overall health of that person.

I hope that is understandable.