“What are Magic Wands and is there only one type of

Tonata……. Good morning my friends.  That is some question!

I have spoken before about the complexity of energies and how it is important to try to make order out of that complexity, – to make order out of chaos.  Where there is order and knowledge, so the energies can be applied far more ably, responsibly and powerfully.  It is not then a matter of blind faith, or the euphemism of that, of intuition.  [Of course there is such a thing as intuition, but so many people say they are acting on intuition yet it is very much just blind faith!]

I have spoken of the difference between a static form of energy such as resonance, where the energy comes seemingly from nowhere, and that of a flowing energy along a line of sight.  I have introduced something of earth energies, energies of the body, energies of the air and something of transducers that change the type of energy. [See Earth Energies page on Website.]  I am now hoping to bring some kind of framework of understanding to those introductions.

Many times in the past I have expressed the differences of opinion that I have with Chinaman on this subject, for, as you are probably aware, the understanding of the East and the understanding of the West is rather different.  We of the West – and I place myself in the West on this point – have an understanding of just four elements, while of the East there is usually accounted five.  It shows how nebulous some of these ideas really are and how difficult it is to categorise these different forms of energy, for there is much overlap of effect of observable phenomena.  However, I will speak of four and start with the element of earth.

We have spoken already of some of these energy forms, such as the energy of the Earth and regarding the Earth itself as a single entity.  We have talked of how that energy of the Earth can be utilised through harmonics as resonance, the static form of that earth energy.  Energy seems to appear out of nowhere, if the buildings or the places are built so that the ratios within those constructions are the same ratios that you find of the Earth, and the Earth to the Solar System.  Such ratios are the natural numbers that we call pi and phi, or ratios taking into account the mass of the Earth, or its distance from the Sun or the Moon.

The flowing type of Earth energy is the energy of the ley line system.  We have already talked of different levels of that ley line system, and of how they correspond to different types of unseen energy work.  The blue line of being is associated with magic, while the purple line is to do with Spiritual Life in some form, and the green line is to do with the balance, with harmony.  These different lines have different associations with different types of magical work.  We have already covered these things just as we have covered the natural transducers of Earth energy, that of crystals [ see relevant question].  So we have covered the static, the flowing, the lines, the transducers, but not the wands!

A wand is simply a tool to help direct energy more easily and more precisely.  Ideally, a wand to help direct Earth energy should be made of stone, of granite.  You do not have to be very strong to lift such wands, for it does not matter so much about the size of the wand as to how it is placed!  The Earth energies need to be channelled and then dispersed over a region, and a ley can be created by standing on an existing line and, by using a granite rod, directing the energy in a new direction.  Then it is best to leave a standing stone at the new intersecting point to help maintain the flow.  The wands of stone, in this case, are a tap into the ley line system, so you see we have already covered so much of this elsewhere.

Energies of water are to do with the body and biological life.  You have called it chi, and the resonating form of that chi is experienced through the chakras.  The channelling form of chi is through the meridian lines of the body, just as you have the geomantic ley line system or the meridians of the Earth.  Those levels of being associated with the different chakras would also be associated with different types of healing and different systems of the body.  You have the circulatory system, the lymphatic system, and the nervous system, so you have different levels of being associated with these different systems.  That is a general rule.

Wands in this case, that most easily channel water energy, are best made of wood.  Wooden staffs have been the traditional wand of the magician or healer.  Again different types of wood, with their different properties, are associated with different levels of chi. For example, the yew staff is best for magic, the blue level, the ash is for that sacramental purple level, and the oak for the green balance.  Such wands are best left with the bark on them and if the bark becomes worn away then that is the time to renew the staff.  Even though the staff itself may have become so familiar that it tingles with the residual energies that reside within it, the bark is like a biological pipe that helps to contain and channel the energy rather than allowing the energy to dissipate.

Although earth energy is best conducted through stone, sometimes a wooden wand or stave can be placed in the ground on a ley line by a healer or a magician, and be used instead.  The wooden staff can not only channel or direct something of that earth energy, but the healer can also transduce it at the same time through thought or a healing rite.  The energy can then be directed, as they still hold the staff on the ground, by pointing that staff in a “line of sight” action to do its work.  If this is not comfortable, the healer may well strike the line with the wand to tap into the energy, then stand on that spot to take the place of the wand, and then point the wand in the line of sight attitude.  However it is done, such an instrument enables the energy to be directed not only more accurately but further as well.

One striking feature of this water type energy, is that when there is much water around, it tends to (I use the term lightly) earth itself.  What I mean is it runs to water.  When you place your aching feet in running water, it is not just the temperature that cools the feet and makes you feel better, but also the disharmonious chi flowing into that stream.

What of the energies of the air?  The energies of the air are more to do with the mind.  This becomes much more difficult to describe and to place in that ordered framework, for there is more and more of an overlapping of function and description.  Although we have described energy of the air as prana, that is on its physical level of being.  The other levels of being of air energy are far more associated with the mental states of being, of the different realms, of the astral levels.

To travel in an astral state, is utilising the energies of the air.  I know it appears to be a mental phenomenon, and the physical body is lying there, but the astral body travels on an astral plane and that is air energy.  The more ethereal the astral plane, the higher the level of being and its associated work.  For example, at the emotional – or second astral or spiritual level of being, the healing work is with emotions, or the energies of homeopathy that are outside the body.

The citizens and dwellers of these different astral levels are, of course, those who have gone on from the incarnational level, but there are the Elementals themselves.  Gnomes, fairies and elves are all words of description of little people, of the Elementals.  The Elementals of the earth are of those that dwell in the earth, caves and grottoes and are usually known in your society as Gnomes.  The Elementals of the woods, trees and plants are more of the water type rather than the earth types, and are usually known as undines.  Those of the air are called Sylphs, and of fire are Salamanders.  Such words are now losing something of their meaning in your society, because you do not dwell on that level and have less and less to do with such things.  It is much more difficult for you to understand and for me to describe in ways that you can begin to comprehend of the kind of life in those realms, but the natural transducers of this air energy are indeed Elementals themselves.

To channel such energies of the air using wands or staves is quite difficult, but such a solid wand would have to be made of a metal such as copper or iron.  Works of magic, of working miracles, are conducted more through the use of air energies than any other form of energy.  It is the holding in mind of a symbol and the sending of a symbol that is the resonating form of that energy.  That is why the wands of magic workings are often made in a symbolic shape as well, for it helps in the holding in mind of the symbol that is being used.  Such wands are therefore made as swords, daggers, sickles or knives.

The natural transducers of this type of energy are the beings of spirit that dwell in these realms who can best be described as gods and goddesses of the various kingdoms of nature.  They are not thought forms, for thought forms are created by mankind and are of the air, the mental energies.  These are the beings that rule, the gods and goddesses themselves, who are sometimes called Divas.  A particular Diva may be the local Diva of a wood, or of a pond, of a place, of a whole kingdom of a type of animal or creature, and as such they have been prayed to and associated with different religions over the many centuries.

But what kind of wand or staff is used to channel those energies?  How does one channel prayer but in sacrament and blessing, and the wands of such energies can only be that of gold – not a pipe of gold, but a solid rod of gold.  Although other forms of energy, the energies of the earth, water or air, can also flow so easily through gold, the energies of fire easily flow only through gold.  So the metal is known as the sacred metal of religion, and by the placing of different types of transducing crystal within the gold, the highest levels of fire energy are transduced to chi, geomantic or prana energies, to the different types of healing energies or whatever is required.  So these gemstones have been used in religious thought and ritual likewise down the centuries.

These are the four different types of energy as understood in the west.  You reach for a particular type of energy for a particular use in mind.  But even this is a simplified understanding, for it is only a four-fold framework even though we have seven levels within each type.  I hope that some time I will be able to introduce something of the Qabalah that puts even more things together in a single system of thought.  That was a symbol or framework of understanding which did not reach its most profound form until many centuries after my incarnation. 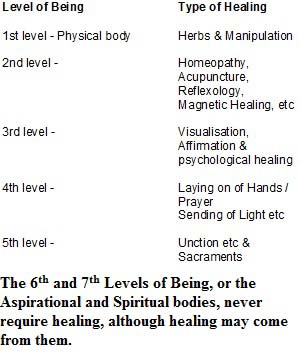 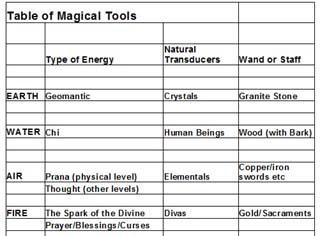